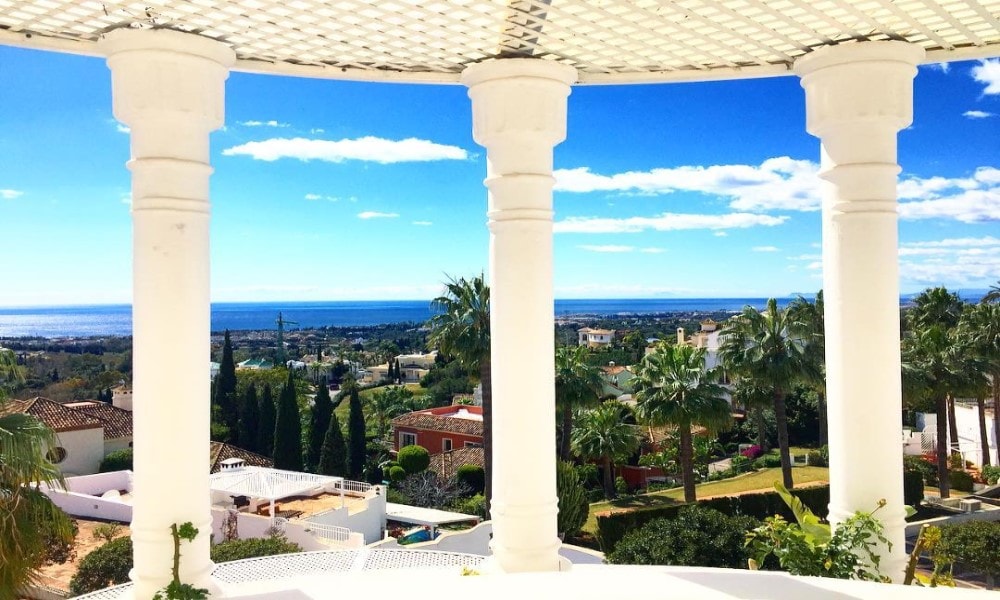 A different taste of Golden Mile

Sierra Blanca is one of the most prestigious urbanizations of Marbella located in the mountainside area of the Golden Mile. It lies three hundred metres above sea level against the foothills of La Concha Mountain, which is part of the Sierra Blanca mountain range. The downtown of Puerto Banus is just a stone’s throw away, making Sierra Blanca property a convenient choice.

The term Golden Mile usually refers to the coastal area which ranges from Marbella City to Puerto Banus. Residents as well as estate agencies, however, call the inland area the mountainside of the Golden Mile.

This residential zone provides sublime views over the Mediterranean Sea as well as the Golden Mile. On cloudless days you are not only able to see Gibraltar, but even the Moroccan coastline.

Not only Costa del Sol’s most famous marina as well as beaches close by makes Sierra Blanca an attractive choice as a permanent residence or second home. Due to its cosmopolitan and multilingual character, you will find a broad range of international schools to choose from. This luxurious urbanization is inhabited by sophisticated people from all over the world that chose the tranquil and majestic mountain area over other hotspots on the Golden Mile.

If you are concerned about safety you can sigh with relief. This private but also central hub is a safe environment and offers a 24-hour security service.

On the 3rd of May every year you can witness the Romeria a la Cruz de Januar. This traditional fiesta goes back to more than one hundred years. Only recently revived, the romeros make their way to the Cruz de Juanar which is erect on the peak of the mountains. This tradition symbolizes myths and tales of bygone times.

More to the west of Sierra Blanca hides the even more prestigious gated community of La Quinta de Sierra Blanca. Quite the opposite to Puerto Banús, it is less urban and more natural. It boasts Villas embraced as well as protected by enormously large gardens.

The area also borders to a natural reserve ranging on the west of it. A paradise for hiking-enthusiasts, this development is one of the most natural addresses in Marbella. It offers homeowners privacy as well as wild, natural beauty.

Thus, this verdant habitat is the perfect match for demanding people. There you can live together with Mother Earth without sacrificing a luxurious lifestyle.

Acquiring estates in this area for the privileged is a secure investment. Sierra Blanca properties, especially villas are highly sought-after due to the phenomenal living conditions. Surrounded by immaculate gardens they are regarded as some of the most desirable property investments in Marbella.

While villas are highly popular, other Sierra Blanca estates are also in demand. There are two major apartment complexes offering everything you need. Lagos de Sierra Blanca consists of sixty apartments valuing luxury as well as security. The development El Alfar was designed by the famous architect Melvin Villaroel and even provides a tropical garden.

Another option is Sierramar, a private community in Marbella. It offers large gardens, private pools and playgrounds for the small. Its owners maintain the development through and through, ensuring the necessary privacy and comfort that characterize a home. All amenities are close by, private schools, public transportation, supermarkets, pharmacies etc.

Strolling along the streets you can see all kinds of architecture, from classical designs to the more extroverted and contemporary ones. No matter if you want to purchase a villa or an apartment, Sierra Blanca properties are famous for their excellent standards.

Sierra Blanca is one of the finest places of Costa del Sol and we even dare to say in the whole of Spain. Here you can send your children to international schools and educate them in a natural environment.

Buying Sierra Blanca estates is a no-brainer as there will always be a demand to live in this private area. In addition, the rental market is experiencing a significant growth.

If you are looking for exclusivity without being exposed and value privacy, your search for a fitting place has come to an end.