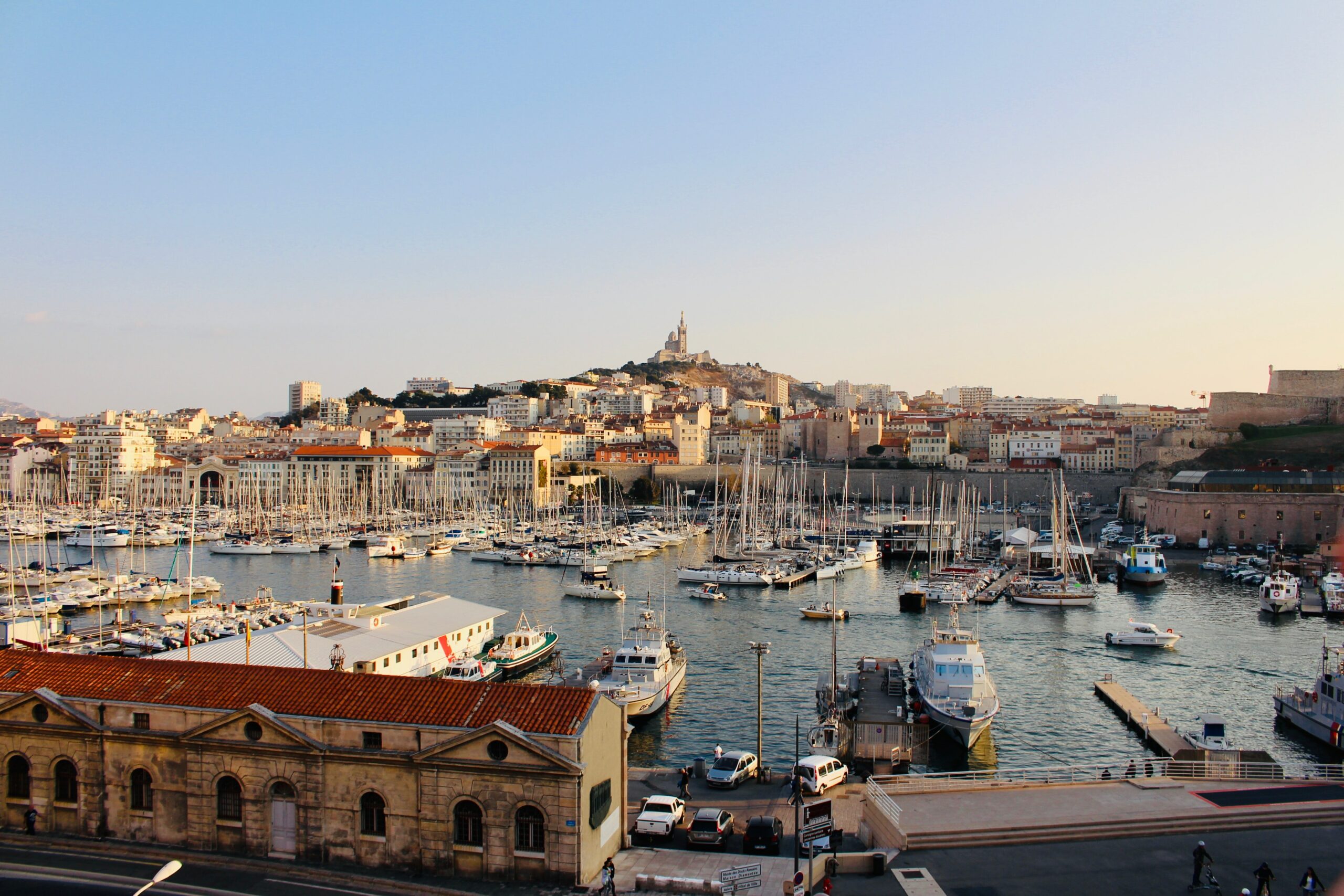 A historical port city with amazing beaches and food.

The city of Marseille is the largest port in France and is located in the extreme south-east of the country. It is known for having been a crossroads of trade and migrations since its foundation in 600 BC by the Greeks.

This port city is the second most populated metropolis in France with a population of just over 1,600,000. It covers an area of 240 square kilometers. It has been marked by great names such as Le Corbusier who built the Cité Radieuse and Zaha Hadid, who built the CMA CGM tower in 2010. The notable Mucem, Museum of Civilizations of Europe and the Mediterranean, erected facing the sea in 2013 was designed by Bernard Latarjet.

Transportation in the city is governed by the RTM, Marseille’s transportation authority. The latter offers efficient public transportation, with 2 metro lines, nearly 80 bus lines (including 2 electric), and 3 tram lines.

The city has an important international airport for international transfers, the Marseille Provence Airport, which is located at equal distance between Marseille and Aix-en-Provence. This airport serves more than 120 destinations, with 33 airlines operating regular flights.

Marseille is located 776 km from Paris, it takes 8 hours by car and 3h40min by train.

The Phocaean city, as it is historically known, is close to several European capitals such as Andorra la Vella, which is 326 km away, Rome, which is 600 km away, Monaco, which is 172 km away, and Bern, which is 437 km away.

The climate in Marseille

The climate of Marseille is Mediterranean, with mild and relatively rainy winters, and hot and sunny summers, sometimes stifling, but tempered by the breeze.

What to do in Marseille

The population of Marseille is relatively young. In 2018, the rate of people under the age of 30 was 37%. Since 2013, the Capital of Culture year, the City of Marseille has been awarded the “Family Plus” label and is committed to developing an offer adapted for families. The aim of this label is to offer attractive rates for families, to make professionals aware of the needs and expectations of young people, and to offer activities adapted to different age groups.

The city was built on waves of immigration. Throughout history, it has experienced significant migratory flows of Italians, Armenians and Corsicans between the 19ᵉ and 20ᵉ centuries. Today, it sees a new wave of immigration of North African origin, which will justify the predominance of people of Algerian, Tunisian, Moroccan origin (2014).

Economically, the city of Marseille is very dynamic. Its geostrategic location makes it a historical gateway for France to its former colonies in Africa. Today, the port of Marseille allows it to transport goods to Africa, the Middle East and Asia. Industrially, the city is known for such flagship products as Marseille soap, tiles and ceramics.

For shopaholics, the city has several major shopping malls and is licensed to open on Sundays. Among the most important shopping centers are Les Docks Village, Le Grand Littoral, Centre Bourse and Prado Shopping.

It is a city that particularly attracts tourists, 5 million tourists stayed in 2019 in commercial and non-commercial accommodation. And 1.8 million cruise passengers stopped in Marseille. This tourist attraction is justified by all the elements that make the city of Marseille, an exceptional French city. It has one of the largest cruise ports in the world, its numerous pebble and fine sand beaches appeal to bathers of all ages. The natural park of the calanques, commonly called the calanques of Marseille, offers a unique experience between mountains, forests and hidden creeks to swim in peace.

More than an open-air theater, Marseille offers an attractive and diversified cultural life. With more than 19 museums and centers dedicated to history, arts and culture, the city offers activities for all tastes and budgets.

There are many historical monuments to visit, the Basilica of Notre-Dame-de-la-Garde or simply Notre-Dame-de-la-Garde, the emblem of the city, is located on one of the highest points of the city and benefits from an elevated altitude because it was built on an old fort. The richly decorated La Major cathedral is also worth a visit to discover its neo-Romanesque and neo-Byzantine architectural style.

For the more athletic and outdoor activity lovers, Marseille is an unparalleled playground. It has 5 golf courses including a 6-hole, two 9-hole, an 18-hole and a driving range. The various national parks in the area offer trails suitable for hiking that are safe enough for seniors. Other water activities include scuba diving, snorkeling, visiting nearby islands such as Friuli by boat, canoeing, kayaking and paddleboarding. There is plenty of fun to be had all year round, whatever the season.

Things to see around Marseille

Marseille is known for always welcoming its visitors with a broad smile, generous gastronomy and a warm southern accent.

A visit to the city is, however, a first taste of the Provence. Indeed, the entire region is exceptional. A walk around the city deserves a place in your agenda. The Parc des Calanques or Calanque de Sormiou offers a breathtaking view only 16 kilometres from the centre of Marseille, making it an ideal destination in the summer months.

The beautiful town of Cassis is located 26 kilometers from Marseille, accessible in only 20 minutes by train. Visitors can’t get enough of the charm of this small village. The town offers a wide range of seafood in its restaurants, local specialties, or the deliciously simple catch of the day, which is a must if you are passing through.

Photo by Elisa Schmidt on Unsplash