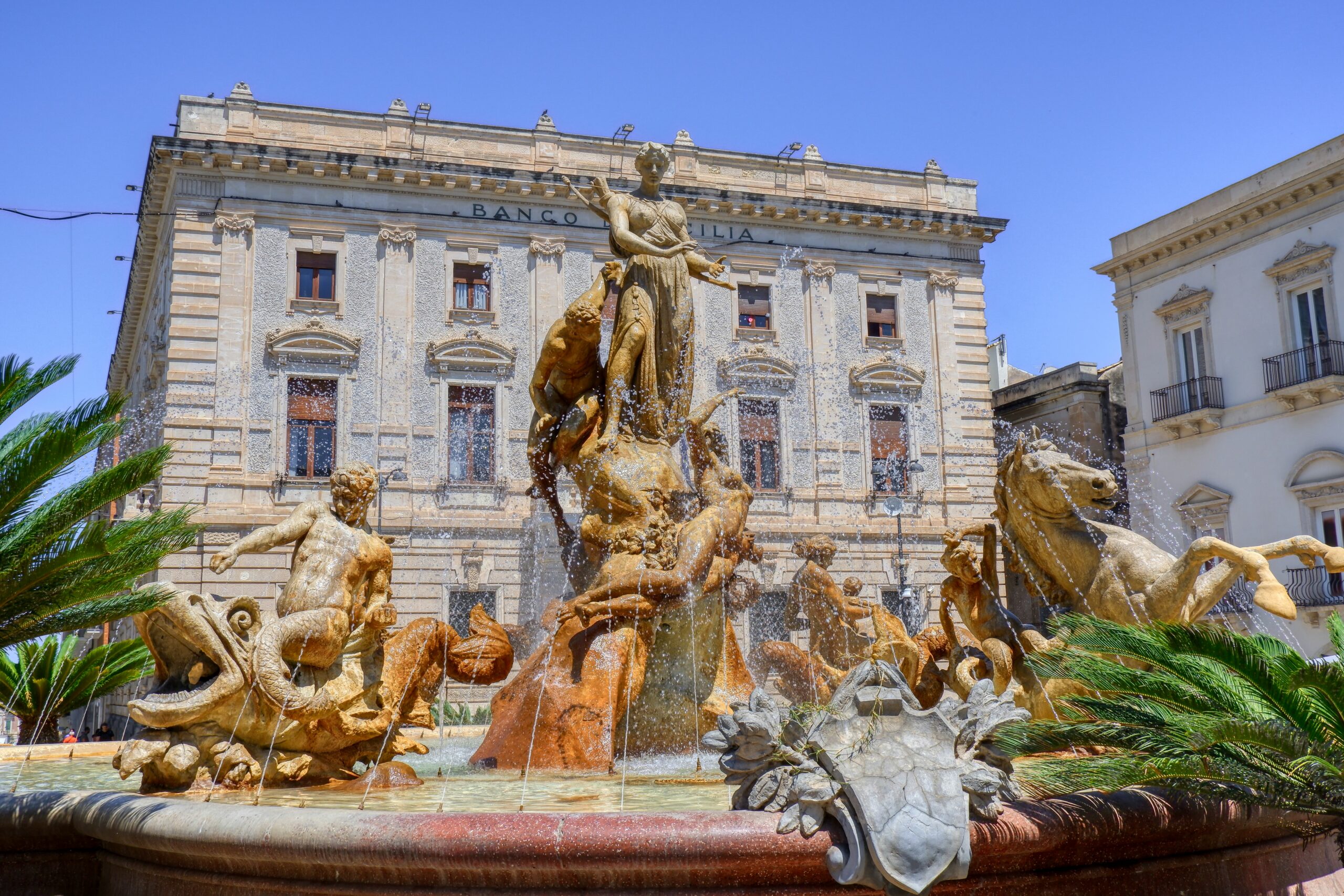 A mix of cultures and civilizations

Syracuse is located in Sicily on the Ionian coast, namely on the south-eastern side. Crossed by two rivers and surrounded by hills, Syracuse faces mostly the sea. Being the fourth largest and most important city in Sicily, Syracuse comprises a small island very popular with tourists, the Ortigia island.

It is situated 307 km from the capital Palermo, and 58 miles from Catania, where we find the nearest airport. Its climate is ideal for those who are looking for a warm place during most of the year, with hot and windy summers thanks to the Scirocco – a hot wind coming from the south-east -, and mild winters.

Living in Syracuse: a complete guide

Established many many years ago – it was in fact founded by the Corinthians around 733 BC – Syracuse presents a rich blend of cultures and civilizations. With numerous archaeological sites and architectural styles, this town is a true paradise for lovers of antique history. Between Greek, Roman, Arab and Norman influences, you can find different styles coexisting on the same building. In 2005 it was recognized as a UNESCO World Heritage Site. Syracuse is known as a really quiet city, suitable for families and people who want to live a peaceful life.

Surely it is the perfect place for those who love art, the seaside and good food.Writers have quoted it since the old times for its sunsets: still today, for those who want to dream in front of the colors of the evening sky, Syracuse offers a unique and unforgettable one.

The principal square of Syracuse is the place where in antiquity stood the Acropolis, today it’s a gathering place for locals and a touristic place for people from all over the world. The buildings around the Syracuse Cathedral are all of Baroque inspiration, and the Town Hall with the offices of the municipality is also located in this area.

Another important meeting place for Syracusans is the Fountain Arethusa, which has been the main water source of Syracuse for thousands of years. The green aspect of this fountain is given by the papyrus plants inside it.

The most important place of interest in Syracuse, which contributes to making it a tourist city, especially in summer, is the Greek Theater and the Monumental Area of Neapolis that hosts it. Many shows are still held in this area, particularly in the spring months, which could accommodate up to 16 thousand people. There is also a volcano near Syracuse, Mount Etna, which rises 10,912 feet north of town.

Syracuse has been a muse for writers, from Greek dramatists to the poets of the Romantic era. The city’s artisans still manufacture papyrus paper, puppets and ceramics inspired by the artisans of the past. This is one of the things that makes it picturesque and with a strong love for tradition.

Syracuse also has a mysterious side that develops underground through the galleries and tunnels that form the ancient necropolis where you can breathe an atmosphere full of symbolism. Charming alleys to get lost in, golden beaches and crystal clear waters, complete the picture of a little Mediterranean treasure.

Always on the artistic end, Syracuse also has museums, such as the Regional Gallery of Palazzo Bellomo. Here you will find collections of medieval and modern art, including sculptures – from Byzantine to Renaissance -, important paintings, and antique Sicilian carriages.

The economic activity that enriched Syracuse was mainly based on agriculture, breeding and fishing, but since the 50’s its industrial development deserves attention as well. The most cultivated products are grapes, olives, cereals, citrus fruits, almonds and vegetables.

As in almost all Sicily, in Syracuse food has a primary role. The Ortigia market is a gastronomic paradise where the delicious scents of local dishes spread among the market stands, which sell spices, cheeses, seafood, cakes and various products.

There is both the chance to prepare excellent dishes at home thanks to the selection of markets, and to taste typical dishes in the many restaurants of the city, or in the street booths.

Every Syracusan knows the fried pasta alla siracusana, the Sicilian macaroni, the matalotta of fish and the frittura di paranza. Then there are the vavaluci, that is stewed snails, and the fungo del carrubo which is a typical Syracuse product that gives flavor to the caponata, here called gghiotta. A special remark goes to Syracuse pastry, which includes cassata, cannoli, and almond paste sweets.

Previously mentioned, the island of Ortigia is considered the beating heart of Syracuse. For those who are looking for an elite spot where to find at the same time culture, history, excellent gastronomy and crystal clear sea, Ortigia is really ideal. The archeological finds date almost 5500 years, and the ruins mingle with contemporary artisan stores and fishermen’s markets. The old town can only be crossed on foot, which enhances its charm, calm and precious atmosphere.

A popular seaside resort is Fontane Bianche, whose beaches are no less than the Caribbean, with white sand and crystal clear water. From walking on the beach, swimming and relaxing in the sun, this site can be enjoyed for several months a year.

A historic district, however, within Syracuse, is Saint Lucia, where there is the church of Santa Lucia al Sepolcro.This place is also popular amongst soccer fans since the “Vittorio Emanuele III” stadium of Syracuse is located nearby, making it one of the busiest and most noisy areas, especially on weekends.

Syracuse can be easily reached by car or motorcycle from the mainland across the Strait of Messina and from other cities in Sicily, thanks to its excellent location on the island. On the other hand, the transportation methods used to arrive there are train, bus and plane.

The quickest way to get to Syracuse from the mainland is by plane from Catania Fontanarossa Airport, which is 65 miles away and well linked by bus.Syracuse can also be reached by train from Catania, Messina, and from other destinations within Sicily and the rest of Italy.

In this case it will be necessary to foresee some changes. The company Siracusa d’Amare Trasporti takes care of escorting passengers from the station to the center of the city by means of electric minibuses, or otherwise you can opt for a cab.

Finally, Syracuse can be reached by bus (as well as from Syracuse you can reach other destinations). This is the preferred means of transport for many inhabitants and tourists, since it is more comfortable, quicker and cheaper than the train.

Surroundings of Syracuse: what to see

In the surroundings of Syracuse there are many places appreciated by locals and tourists. For instance, even though Syracuse is a city that faces mostly the sea, many people choose to go to beaches out of town during their spare time, such as those in the seaside resorts of Arenella, Ognina and Fontane Bianche. These destinations can be reached by car, or comfortably with AST city buses.

A very popular town around Syracuse is Noto, which is also a UNESCO World Heritage Site and is called the capital of Baroque, just one hour driving. In 1693 it was destroyed by a huge earthquake, but has been reconstructed by the best engineers and architects in Europe.

Nearby are also Modica, Scili and Ragusa, which can be easily reached by train or by other means of transport. Catania, one of the biggest Sicilian cities, is also reachable from Syracuse, and normally whoever decides to make this stop stays more than one day in order to enjoy the charms of this city.