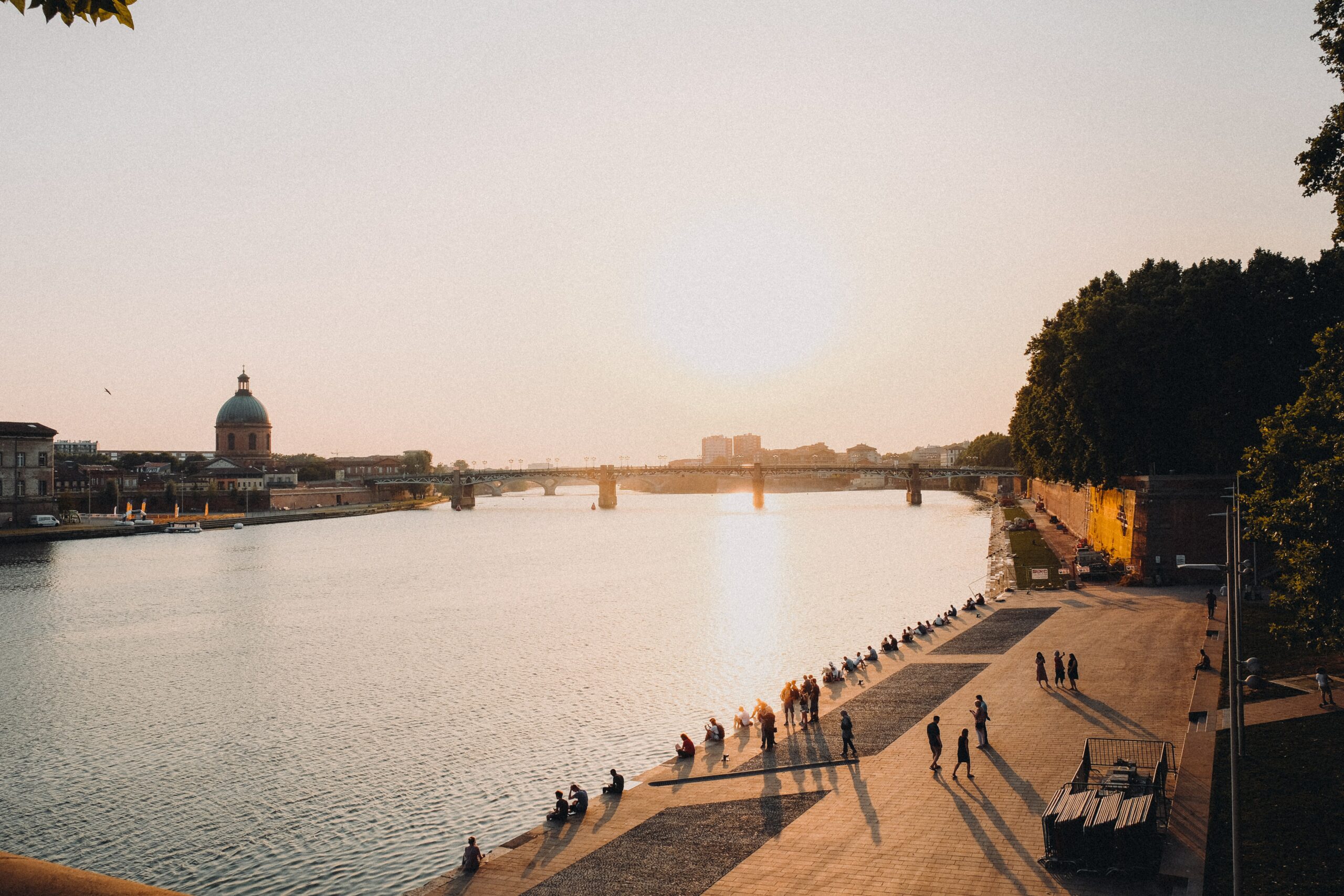 Where culture, technology and tourism meet by the riverbanks.

Where is Toulouse in France?

Toulouse is a city in southwestern France, located in the Occitanie region, in the Haute-Garonne department. Geographically, Toulouse is located 150 km from the Mediterranean Sea and 200 km from the Atlantic Ocean. The agglomeration of Toulouse is very large and consists of 37 communes, which cover an area of 120 km².

Toulouse Metropole is the fourth most populated city in France after Paris, Marseille and Lyon. The city had 493,465 inhabitants according to the latest official figures for 2019. Toulouse’s population is relatively young with more than 40% being under the age of 30. The number of inhabitants is now rising sharply with an increase of 7.67% compared to 2013, according to INSEE.

Toulouse is one of the few large cities in France with positive population growth. This can be explained mainly by its pleasant climate, its strategic location between several tourist basins such as the Pyrenees, the Mediterranean Sea, the Basque and Landes Atlantic coasts, but also by its midi-pyrénéens terroirs, and its industries and services with high added value.

What to do in Toulouse

Toulouse Metropole has a strong economic, cultural, artistic and tourist dynamic. The city was ranked as the most dynamic in France by the business magazine Challenges in 2012 and 2015.

It is also the European capital of the aeronautics and space industry with the sites of Airbus Commercial Aircraft and its parent company Airbus, generating a strong attraction for employment. In addition, companies specializing in biotechnology, electronics and embedded systems are present. These renowned companies have fostered advanced higher education in the region. More than 100,000 students are concentrated in the universities of Toulouse.

The tourism sector also plays a key role in the city of Toulouse. With the slogan “Toulouse has everything! All that’s missing is you”, the Toulouse tourist office promotes tourism through discovery tours of all types of art and cultural subjects and gastronomy, known for its dishes marked by a rich agricultural and productive soil.

Known for its microclimate, the place enjoys a pleasant, temperate and warm climate. The city has a very hot and dry summer, a very sunny autumn, a more marked winter and a spring marked by recurrent rains.

Toulouse has a unique cultural diversity. In terms of architecture, it is nicknamed the “Pink City” because of the color of the terracotta bricks used in traditional local construction. Its notable architectural style has also been awarded Unesco World Heritage status on several occasions.

In terms of activities, rugby is the emblematic sport of Toulouse with its club Stade Toulousain. Its club has the richest record in France and Europe with 21 French and five European championship titles.

The city of Toulouse also hosts numerous cultural events and festivities dedicated to music, dance, cinema, theater, and literature. The Rio Loco festival, the Piano aux Jacobins festival, the Printemps du rire, the carnival of Toulouse, the Marathon des mots and many others are events that punctuate the socio-cultural life of Toulouse throughout the year, not to be missed if you are visiting.

To see around Toulouse

Various discovery tours are offered by the Toulouse Tourist Office. The “Ville Rose” tour or the “Toulouse Verte” tour in an electric Tuk Tuk makes you discover the historical center in an ecological way. The Cité de l’espace, a state-of-the-art planetarium, offers a total immersion in the world of aeronautics, fascinating all audiences.

The famous Toulouse barges also offer you to sail along the Garonne and the Canal du Midi, a UNESCO world heritage site linking Toulouse to the Mediterranean Sea, for a unique river trip, on the edge of the city. The boat-restaurant l’Occitania, a cruise boat, welcomes you for an original lunch or dinner along the water. The banks of the Garonne river offer one of the most beautiful panoramas of the city of Toulouse with the view on the Pont neuf, the Hôtel-Dieu Saint-Jacques, or the dome of La Grave. The area is especially known for its river banks, which are ideal for sunbathing in the heart of the city of violets.

Finally, with the tourism pass, the entrance to the monuments and attractions of Toulouse is at a preferential rate. The Capitole, the center of the city, is the emblematic building of Toulouse, a majestic building erected in the heart of the city in the 18th century. It houses both the city hall and the municipal theater. The Saint-Sernin basilica, the Jacobins convent with its southern gothic art and its superb stained glass windows are some of the most emblematic elements for history lovers. The Hôtel d’Assézat, an exceptional building bequeathed to the city in 1895, has been home to academies and learned societies, including the Jeux Floraux, since the 14th century.

As for air transport, Toulouse has an international airport, Toulouse-Blagnac Airport, and three other civilian airports. The first one is close to the city center, and it takes only a few minutes by tramway to get to many destinations around the world. The road network is also well developed, with six highways linking Toulouse directly to Limoges, Narbonne, Bordeaux, Tarbes and Albi, making the city a modern and accessible economic hub of the French nation.