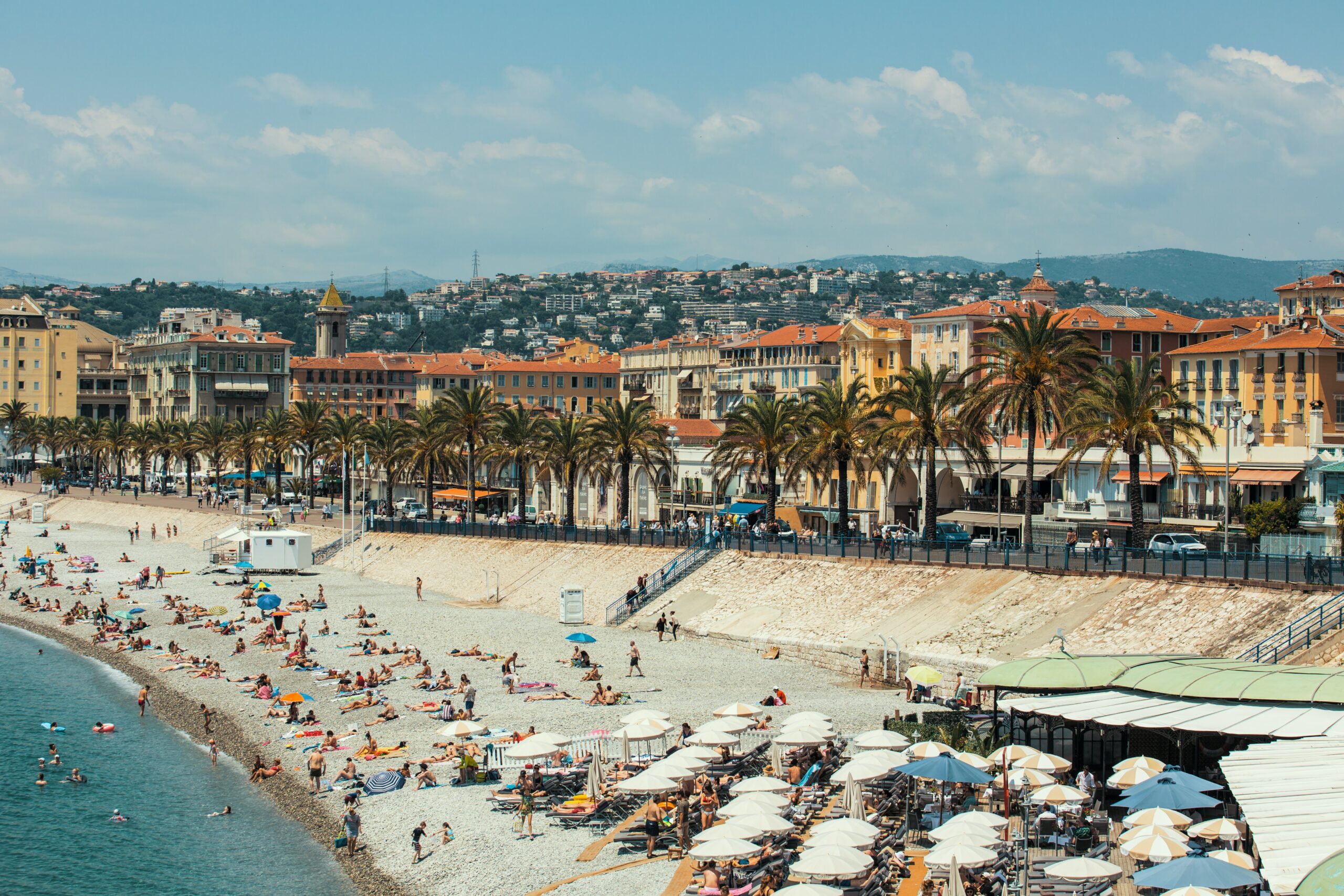 A gem of the French Riviera

Where is Nice in France?

Nice is a city located along the coast of the Bay of Angels. It is the capital of the Alpes-Maritimes department on the very famous and popular French Riviera. It was founded by the Greeks and then occupied by the European elite in the 19th century. With its sunny and lively landscape, the city attracts the interest of artists of all kinds, who have always been inspired by it for their creation.

Today, the region is a reference for its artistic influence. It has several museums, including the Henri Matisse Museum, dedicated to the artistic career of the painter from this city in the South of France. The Marc Chagall museum houses some of the artist’s greatest religious works.

The city of Nice covers an area of 71km² and has more than 340,000 inhabitants (2015), making it the fifth-largest city in France, after Paris, Marseille, Lyon and Toulouse.

Economic and cultural capital of the French Riviera, the city which is nicknamed “Nissa la bella” by its inhabitants, having even dedicated a hymn to it, benefits from important natural assets thanks to its location between mountains and sea. It has the second-largest hotel capacity in the country, which allows it to welcome about 5 million tourists every year, like its renowned neighboring cities, Cannes and Antibes.

The city has an infrastructure that allows residents to move around and travel by public transport, as well as being very well equipped for drivers. There are 3 also tram lines and 5 bus lines.

The Nice Côte d’Azur Airport is only 6 km from the city center and connects the city to its most important external destinations such as Europe, the Maghreb, the Middle East and America through regular flights.

Nice and Paris are 939 km apart, it will take 9 hours and 10 minutes to drive from one point to the other. It takes a minimum of 6 hours by train to get to Nice from Paris, sometimes more, as there is often a connection in Lyon.

Nice has the privilege of being located a few kilometers from Italy and Monaco. It takes 400 km to get to Rome, only 13 km to get to Monaco and 362 km to get to Bern, the capital of Switzerland.

The climate of the city corresponds to the standards of the Mediterranean climate.

Nice has an average temperature of 14.8 °C throughout the year, making it one of the highest in continental France, after Menton and the Toulon region.

What to do in Nice, France

Tourism is very developed in Nice compared to other comparable areas. For an equivalent population, its accommodation capacity is ten times greater. Nearly 15% of homes are second homes, compared to 1.1% in comparable areas. The hotel industry is also more frequent and offers a full range of high-end products and services for a predominantly foreign clientele (60% of overnight stays).

In Nice, we eat well and above all, we eat healthy! Local resources are favored, such as olive oil, fruits and vegetables from the region. Nice’s cuisine is essentially Mediterranean and influenced by Provence. Typical local dishes include zucchini flower fritters, gnocchi, daube niçoise and polenta, which are typical of the small bars and terraces in the shady streets of the city. There are 27 restaurants in Nice listed in the Michelin guide, offering traditional, creative, regional, modern and international cuisine.

The city of Nice: art and architecture

Among the notable elements are the buildings dating from the 19ᵉ century, very well-preserved as the Museum of Fine Arts of Nice or the building of the Credit Lyonnais, which displays a classical and Palladian style.

What is very pleasant in Nice is the wide choice of courses and walking paths to walk with the family, jog, play the famous game of pétanque or even let yourself go on the alleys of the port of Nice, to discover all the charm of its “pointues”, small wooden period boats that are the pride of the Nice inhabitants. Among the most popular and frequented places: the Place Garibaldi and the Place Saint-François.

On the artistic side, Woody Allen was once so charmed by the city that he chose it to shoot his famous film “Magic in the Moonlight” in 2013. The area also hosts a jazz festival, “Jazz à Juan”, every year in July. The whole city comes alive during the summer vacations, but also through all the activities that accompany the Jazz Festival and bring in the curious, like guided tours, exhibitions and music sessions.

If you like golf, the city of Nice offers five golf clubs, three of which are 9-hole and two 18-hole, to practice your passion. For thrill seekers, the city offers various activities such as parasailing, jet ski rental, scuba diving, paragliding and canyoning for all ages.

What to see around Nice

There is no lack of activities around Nice. It is possible to discover exceptional places just a few kilometers from the city and to be completely disoriented.

Antibes is only 23 km away, or 25 minutes by train and 35 minutes by car, leaving the opportunity to enjoy a stroll through its photogenic streets, to discover the Picasso museum, integrated into the old Grimaldi castle, offering more than 250 works of the artist.

For wine lovers, you can also taste exceptional products at the Château de Bellet located 11 km away, or 20 minutes by car, very famous for letting its visitors walk through the vineyards and enjoy a quiet moment in the chapel.

You can even leave France and visit Monaco, which is only 30 minutes away by car or train. Another attraction not to be missed is the aquarium of the Oceanography Museum, 85 meters below sea level, which has the reputation of always surprising its visitors, young and old.

Finally, be one of the lucky ones and create your own perfume in Grasse in one of its many perfume shops. The perfume capital is located 45 km from Nice. You can retrace the history of perfume since antiquity in the internationally renowned Musée International de la Parfumerie.