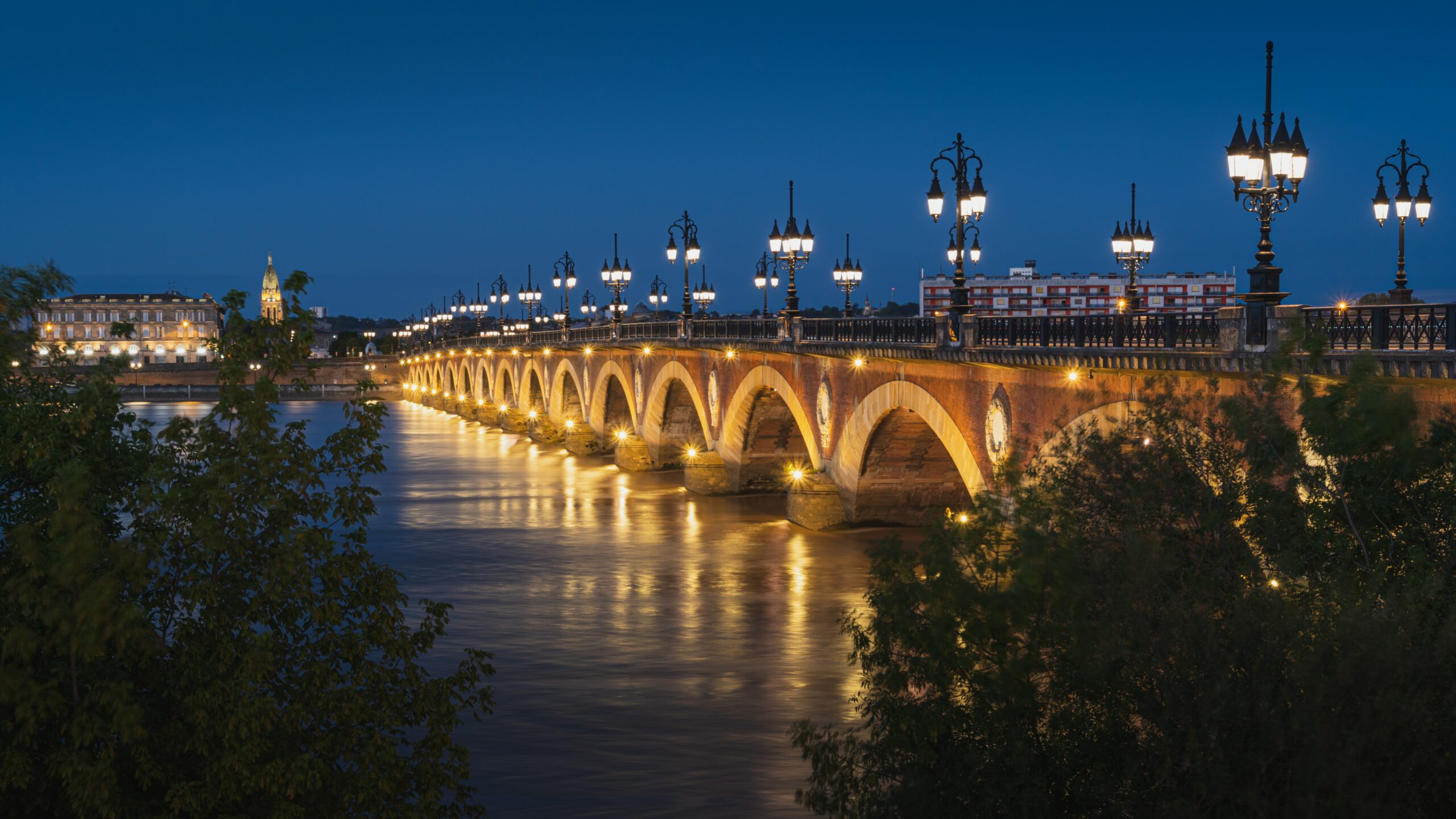 A privileged position in Europe within the heart of world’s wine capital.

Bordeaux is a port city located in the southwest of France. It is located in the heart of a major wine-producing area, in the Gironde department, in the Nouvelle-Aquitaine region. Bordeaux Metropole covers an area of 49.36 km², includes 28 municipalities and has 986,879 inhabitants (according to the latest official census of 2019).

An integral part of Gascony, the city of Bordeaux enjoys several geographical specificities: located at the crossroads of the Landes forest and the Gironde estuary. It is also crossed by the Garonne River. Located at about 50 km from the Atlantic coast, Bordeaux has tourist sites of the Arcachon basin such as the Dune du Pilat, the Cap Ferret (65 km) or Royan (90 km).

Historically, the central position of Bordeaux has favored commercial, land and river routes, which has led to its economic and cultural development. Bordeaux is one of the main cities in France, with a worldwide reputation, attracting curiosity and major investors. Internationally, the Bordeaux region is known as the world’s wine capital thanks to its prestigious chateaux and centuries-old vineyards. The Romans already planted vines from the Basque Piedmont on the banks of the Garonne. The city of Bordeaux holds a privileged position in France and in Europe, making it a real economic, tourist and cultural hub.

Guide to the city

Bordeaux’s population is very young with an average of teenagers and young adults aged 15 to 29 – almost twice as high as the national rate, according to INSEE (30.1% versus 17.5% in 2018). This young population brings a privileged dynamic within the city, through its choice of activities and its extended hours of use of the center.

In terms of economy, the Bordeaux metropolis is a central and strategic pole of the aeronautics and space sector. International companies such as Dassault Aviation, Ariane Group, Safran and Thales are located here. In addition, the rate of new businesses is at an all-time high, with 7,883 new companies being created in 2020. This performance makes Bordeaux metropolis the second city in France in terms of business creation.

As the world capital of wine, this sector holds a key place in the economy and culture of Bordeaux. Thanks to the exceptional Bordeaux wines, which are prized worldwide, the city of Bordeaux is considered one of the centers of French gastronomy. The international Vinexpo trade show and the visit to the village of Saint-Emilion are the must-see events for the world’s leading operators in the wine and spirits sectors.

Business tourism is also a must for Bordeaux Metropole. Numerous infrastructures are available to host the largest international congresses and events: the Cité Mondiale located on the quays, Hangar 14 in the Chartrons district, Bordeaux-Lac, the Palais des Congres, the Palais de l’Atlantique and the Parc des Expositions.

Bordeaux Metropole is also a major player in the maritime cruise industry. The large port of Bordeaux welcomes the largest cruise ships, making the city the second largest French cruise port of call on the Atlantic coast.

With a mild climate in winter and a hot summer, Bordeaux is a great place to live. Residents and tourists alike enjoy good weather all year round.

As for the aesthetics of the city, both residents and visitors marvel at the exceptional heritage of Bordeaux Metropole. Known as the “Sleeping Beauty”, Bordeaux is classified as a city of Art and History. With over 2000 years of experience, the city of Bordeaux traces its rich heritage through collections of works that are equal to its testimony.

Visiting its museums is one of the tourist activities not to be missed. Several types of museums are easily accessible through the public transportation network. The Musée d’Aquitaine is one of the best known, a must-see especially for a walk and to recharge your batteries. Bordeaux Metropole has been listed by UNESCO as a World Heritage Site since 2007. Thus, Bordeaux is undoubtedly an exceptional city for art and heritage lovers.

What to do in Bordeaux

Bordeaux has several tourist attractions. Because of its identity as a wine reference, museums and events dedicated to the subject are a must and always delight professionals and amateurs alike. Indeed, the region is known for its network of experts appreciated for educating and accompanying visitors of all levels in the approach of the Bordeaux wine universe.

Events such as Bordeaux fête le vin, Vinitech, Jazz and Wine are key events for those interested. The Cité du Vin, the Musée du Vin and Négoce de Bordeaux are also tourist sites that honor their local specialty, not to be missed. Parks and gardens are also available around Bordeaux such as the Parc Bordelais, the numerous chateaux and the Jardin Public, perfect for escaping the lively city atmosphere of Bordeaux, “Port of the Moon”, for its crescent moon shaped river, where you can find peace.

Bordeaux has become a forerunner in access to transport thanks to the launch of a major urban development project to promote mobility for all, both technically and in terms of pricing. Grouped under the name Transports Bordeaux Métropole or TBM, the public transport network is composed of 4 tramway lines, 85 regular bus lines, 230 Trans-Gironde regular bus lines, 34 TER Nouvelle-Aquitaine lines and 2 RER Métropolitain lines. TBM also offers river shuttles to connect the two banks of the Garonne.

In downtown Bordeaux, car traffic is limited to support the ecological transition. Car-sharing electric cars and electric bicycles also complement the public transport offer, to get around the city center with complete peace of mind.

As far as the road network is concerned, Bordeaux is a major road and motorway hub. Several highways connect Bordeaux with the major cities of France and Spain.

The city has an international airport. It is located about 10 kilometers from the city center and is accessible by private shuttle, streetcar and bus. More than 76 destinations in Europe can be reached from Bordeaux-Mérignac airport, which serves as a base for the largest international airlines.